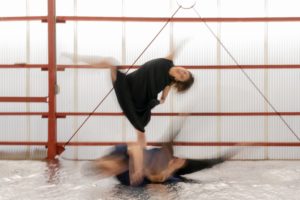 Tarinof dance company
A contemporary dance company founded by Maiko Hasegawa and Mamoru Sakata in December, 2013.They perform joint creation, direction, constitution, choreography, and appearance.They pursuit the way of human relationship in space and express it in a simple way. They also study a body that variously changes every work. Company’s 1st places experience .“Amulet” (title of work)won the first place, Minister of Education, Culture, Sports, Science and Technology Prize, and Goro Yamada Prize, in the choreography creation section of 2012 National Dance Contest (Tokyo, April, 2012).”Tarinof” won the first place in CONCOURS CHOREGRAPHIQUES DU FESTIVAL D’ICI DANSE A VIZILLE 2014 (May, 2014).“Nisya” won the first place in the 18th Festival of Choreographic Miniatures at Belgrade (June, 2014).And CORTOINDANZA” 7th EDITION 2014 National and international projects of contemporary dance in the Mediterranean basin at Itary Cagliari (June ,2014).Both Maiko Hasegawa and Mamoru Sakata obtained fellowship under the Program of Overseas Study for Upcoming Artists of Agency for Cultural Affairs of Japan, and will stay in Paris until the beginning of September 2015. Finalist of MASDANZA in SPAIN 2016.Finalist of Yokohama Dance Collection conpetition 1 in Japan 201.
During 2013 to 2017 they have performed and given their workshop 7 countries 35 cities.

Maiko Hasegawa
She started to learn classical ballet from four years old.  Her mentor was Michiko Baba, BMB Baba Michiko Academie de Ballet.  She participated in Prix de Lausanne and appeared on the stages of classical ballet.   After finding her way to a contemporary dance at the age of 20 years old, she distinguished herself and won the first place and the Tachibana Akiko prize in the 2009 National Dance Contest held in Saitama, Japan.  In the same year, she launched a dance project company, “m.” where she worked on direction, composition, and choreography herself.  Since then, she gave performance every year and expanded her activity.  In 2011, she released “Molu”, a collaborative work with a musician from a dance project “M+”, an evolution of “m.”.  This work was performed in Tokyo and Osaka, Japan.  In 2012, she joined a dance company, Nohmi Kenshi & Dance Theatre 21.  This encounter changed her sense of values for creation; she is now seeking for, in her daily life, the hints necessary for building up her own creation style.  From 2013, she stayed in Paris, France for two and half years under the Program of Overseas Study for Upcoming Artists of Agency for Cultural Affairs of Japan.

Mamoru Sakata
He started to learn modern dance and classical ballet from childhood.  Nohmi Kensi and Hiromi Karube were his mentors for contemporary dance, and Masumi Tanase and Yoko Tanaka were those for classical ballet.  He now belongs to a dance company, Nohmi Kenshi & Dance Theatre 21.  He graduated Art Department, Faculty of Literature of Tamagawa University.  During his student days, he studied abroad in Trinity Laban Conservatoire of Music and Dance, London, U.K. where he learned choreography and dance technique and finished ISP course.  After returning to Japan, he appeared on a lot of works of domestic and overseas choreographers and won the first prizes in many dance contests in Japan with solo works of his own.  He also received the new face award and the encouragement prize from the Contemporary Dance Association of Japan.  Recently, he is holding physical expression workshops for children in classical ballet and modern dance studios and those with physical and mental disability.  In 2012, the first collaborative work with Maiko Hasegawa, “amulet” won the first prize, the Minister of Education Award and Yamada Goro Award in the category of original work of Tokyo Shinbun National Dance Contest.  From 2013, he stayed in Paris, France for two and half years under the Program of Overseas Study for Upcoming Artists of Agency for Cultural Affairs of Japan.